Last year, I made a card for each of Koby’s family members, but between moving, and then his present not being ready until he was already in Thailand, they weren’t given at Christmas. Then one went missing (I have suspicions as to why, and it upsets me, but I will never be able to prove it.) Finally, I just redid the missing one, and decided to spruce up the others. Here are before and after pictures. Some of the differences are due to using different scanners, but I explain the changes made.

The motorcycle was completely redone. More attention to detail, less freedom. Not as fun that way, but more like a motorcycle. Mechanical things are not my strong point.

The cola bottle wasn’t showing up too well, so I defined it more, added stronger color to the background, more texture, a surface for the bottle to sit on, and the words.

Outlining was added for the drums and words.

The words were made more visible with white gel pen and some white paint was added to the edges to balance the brightness of the words.

He Dresses the Lilies

Outlined the stamped words and images for more clarity.

Some have seen this already, if they had the password, but I wanted to post it publicly now that its in the recipient’s hands. (My grandma has the url for my blog, so I didn’t want her seeing it early!) 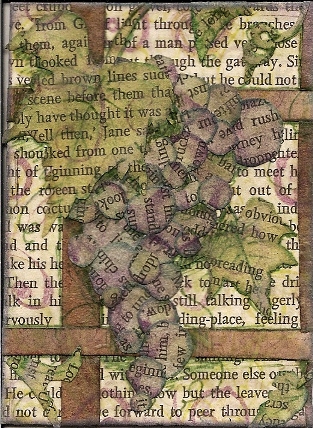 Protected: Keep it a secret!

Dani and I had creative writing classes together since freshman year, and from the start, I loved her writing. I really got to know her more towards the end of the program (it always seems to work that way…) but I count her among my dearest friends. She has a passion for J.M. Barrie’s Peter Pan (yes, this is the same friend with whom I made the treasure box) and so I decided I’d make an ATC for her birthday featuring the homeland of her imagination– neverland. However, she is away visiting her family’s homeland– the Philippines– so she won’t get it until she gets home. I hope she might see it on here though 🙂

I took pictures as I worked, so a tutorial will be coming.