I think I need a push

I am probably speaking into the darkness here, but I thought I’d share my lack of progress. I’ve been fairly discouraged the last few days, artistically and otherwise, not to mention mildly sick. I’m starting to doubt my goal is reasonable. I’ve picked my three projects, but before I can even start I need to clean my desk (and the cat-box beneath it, which I seriously suspect my sister leaves entirely to me). Thus… I have to contend with clutter, smell, fatigue, and a general lack of inspiration (I have my projects to start from, but I don’t particularly know where I am going with them.) I intended to start last night, or at least clean, and be elbow deep in art by now. So far… not so good.

Last November I participated in NaNoWriMo (hence my sudden absence). Thus, I was writing 1667 words a day towards a very poorly plotted quasi-fantasy novel. It was a huge challenge, and for the first time in the 4 or 5 years I’ve participated, I actually won (defined by reaching 50,000 words before midnight on November 30). I even did that despite sabotage by my computer. Hurrah. I never did reach the end, but I really want to work on my art for awhile.

This last week, I saw the movie  “Julie and Julia,” which chronicles the story of a woman (Julie) who gives herself one year to work her way through Julia Child’s cookbook “French Cuisine for Servantless American Cooks” — and blogs about it. I really only have a minimal interest in cooking, but I thought “Wow. I want to have some kind of goal like that for my art.”  For the last few days I’ve been thinking. Then, I realized, “Oh my word, New Years is coming!!!”  Thus I started thinking harder.  Now, in the last few hours of 2009 I’ve (mostly) settled upon something.

“Each week, I will choose and complete (x amount) of projects directly from or inspired by one in an art magazine, art book, or blog tutorial.”

I still need to define “X” (I’m thinking 3? Any input on that?) and I may need to have an exception for complete (in case it’s a large, multi-step project, in which case, perhaps it can be broken into chunks?) I’m still working this out.

In the meantime, I am having a fairly tame New Years Eve playing on the wii with my parents and enjoying a few snacks. Tomorrow, however, the challenge will begin (after the traditional movie with my family).

I SAID I wasn’t going to make any more cards. I realized I was horrible at it. And what do I do? My college roommate’s wedding comes up, and I don’t want to give her an impersonal store card when the gift is already something from the registry rather than something with any thought from me. So, despite previous lessons, I made a card. It is the most horrendously ugly thing I’ve ever seen. For a WEDDING. Where things are supposed to be pretty and elegant. And now, I have a few hours to find a solution, which will likely be some store thing, only with less time to choose a nice one.

I am an idiot.

I never really understood this whole “card-making” craze. Who do you send all these cards to? How do you come up with clever little hallmark worthy phrases? How do you keep from gagging with all the cutesy themes?

However, I do follow a few challenge sites that include (or focus exclusively upon) cards, and I gave it a try. Despite the HOURS of work that went into making my tree card, I did enjoy it, to an extent. I believe my boyfriend liked it, at least. However, I have resolved I will never make a card again. (Yes, I am aware that by saying so, I will probably end up doing one again for some inescapable cause or another.) My reasoning is as follows.

Card making is just not for me. I gave it a shot, and I still don’t get it.

On a related note, it may be awhile before I post anything, for two reasons.  One, I’m kinda hitting a lovely bout of the doldrums. No inspiration lately. Two, the scanner I am accustomed to using is hooked up to a monitor that decided to stop working. Its within the warranty period, but it still will take time before its fixed/replaced. I can probably use the camera, but those often come out rather odd. By the time I have anything to make, the technical difficulties will likely be past.

ATC: Summer (An Exercise in Failure, Persistence, and Success)

I set out knowing exactly what my first art piece on my new desk was going to be. It should have been simple (and thus, should have been posted early last night). While running errands last week, I saw something that seemed like a good composition (and a good entry for the “Doors and Windows” challenge on one of the challenge sites.)

I sketched it down, determined to do it later, in marker. I did, and it looked good, but it was missing something. So… I added. Unfortunately, the more I added, the worse it got. The words were somewhat fun to add, going every which direction, but they just detracted from any discernible focal point, rather than adding. I resigned it as a failure. But… I couldn’t leave well enough alone. I crumpled it, flattened it, wet it, crumpled it more, then tried stitching the words. Then… stitched a piece to mount it on (stupidly choosing to do it by hand, which took nigh close to forever) and stitched it to the backing (this time, by machine. I is smart artist!) The stitching added what I needed. I now declare it finished– and a long sight from what I intended. 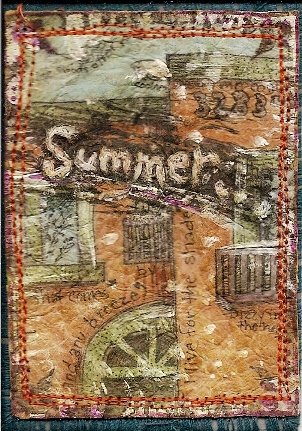 This piece really got me thinking about the art process. Some thoughts that came to mind:

I’ve never been good at attatching significance to a particular day, or month. I don’t engage in “New Years” resolutions, but rather, I make them on an ongoing basis, throughout the year. Sadly, I keep them much less often than I make them, but sometimes, they result in tiny revolutions in my life, and those few tiny revolutions make it worth it. Now that I am home, with no job, and too much time on my hands, I’ve been thinking often about what I want to do. Some things have come to mind more frequently than others, more forcefully.

* Realisticly, daily means something more like most days of the week, but its easier to achieve if I just tell myself its daily….